The Victorian Planning Authority proudly acknowledges Victoria’s Aboriginal community and their rich culture and pays respect to their Elders past and present.

We acknowledge Aboriginal people as Australia’s first peoples and as the Traditional Owners and custodians of the land and water on which we rely.

We recognise and value the ongoing contribution of Aboriginal people and communities to Victorian life and how this enriches us.

We embrace the spirit of reconciliation, working towards the equality of outcomes and ensuring an equal voice.

Melbourne’s growth corridors were created in 2005 and the area within the Urban Growth Boundary was rezoned as the Urban Growth Zone (UGZ) to facilitate the transition to urban land. The PSP process was introduced in 2006 to better coordinate the various organisations and decisions involved in strategic planning for land zoned UGZ.

The VPA is working with stakeholders on a PSP reform agenda to introduce the next generation of PSPs that will shape the future of Victoria.

For more information, refer to the thumbnail links below: 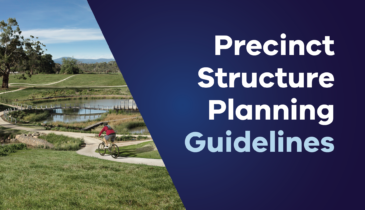 PSP 2.0 The PSP 2.0 process sets aspirational targets including co-design of the Precinct Structure […]