The rise and rise of Victoria’s population growth continues, with figures released by the Bureau of Statistics yesterday showing Melbourne grew by 107,770 people in 2016 – the highest ever yearly increase.

These figures highlight the importance of the State Government’s major planning and transport projects, including Plan Melbourne, the Level Crossing Removal Project, Metro Tunnel and the recent announcement of unlocking land for 100,000 new housing lots.

The figures show more people are moving to South Morang than any other suburb in the nation, while Cranbourne East, Craigieburn and Point Cook are also in Australia’s five fastest growing areas. 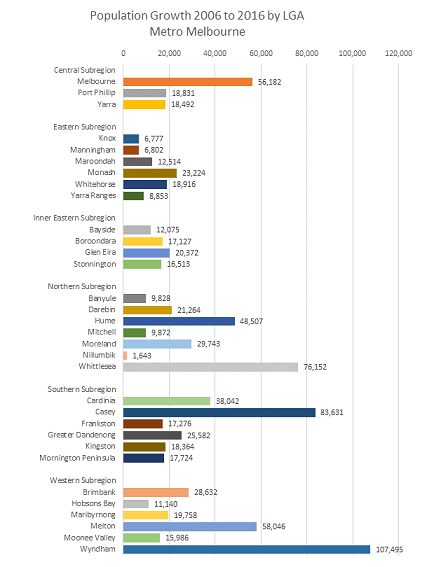 Let’s look at some of the highlights of yesterday’s figures:

Today’s figures come as no surprise to the Victorian Government. We have known for some time that Victoria is rapidly growing and the VPA has been doing our part to plan accordingly. Some our major projects that will help Victoria accommodate new residents include:

·         Recently released framework plans for the Monash, La Trobe and Sunshine National Employment and Innovation Clusters, which will allow people in our booming suburbs to work close to where they live (see more below).

·         Various regional projects that will ensure our regional towns and cities can grow in a coordinated and well-designed manner, including in places such as Wodonga, Bendigo, Shepparton and Bacchus Marsh.

·         A range of urban renewal projects, ensuring existing land no longer used for its original purpose – such as old industrial sites – are redeveloped to serve the community’s needs.

Talking about statistics, the VPA has released its March State of the State report, which encapsulates key demographic and economic metrics across Melbourne and Victoria.

Minister for Planning, Richard Wynne, has released the framework plans for the Sunshine, Monash and La Trobe National Employment and Innovation Clusters.

These clusters were identified in Plan Melbourne 2017-2050 as important medical, research and education precincts that have large concentrations of jobs. The biggest cluster is the Monash Cluster in Melbourne’s south-east, which is a base for 75,000 workers.

With the right planning and investment – including better transport connections and local amenity – the clusters will continue to prosper and provide employment to an even greater number of Melbourne’s growing population. This will free up space on our roads and public transport and give people back precious family and leisure time.­­­

The framework plans are high-level documents that outline key infrastructure investment and changes to planning rules needed to make sure Melbourne has a number of thriving job and innovation hubs – not just the CBD.

Some of these recommendations have already been implemented. For example, as a result of changes to zones in the Monash Cluster it will now be easier for hotels to be built in many of the booming business areas in Clayton. Previously hotels weren’t able to built under outdated rules.

This will result in more accommodation for the cluster’s international visitors and researchers: helping attract the best and brightest to the area. Indeed, there are encouraging signs that our suburbs are attracting new businesses and traders, as this article exemplifies.

Click on the links below to watch our short videos summarising the VPA’s vision for the clusters.

Victoria’s housing strategy, Homes for Victorians, was released on 5 March 2017. It builds on existing work being done, including Plan Melbourne 2017-2050, reform of the Residential Tenancies Act 1997, the Better Apartment guidelines and the Family Violence Housing Blitz. The strategy acknowledges the need for a whole-of-government approach to making homes more affordable and more accessible.

This includes helping people to buy their first home, increasing housing supply, creating a more stable rental market, upgrading social housing and improving services for Victorians looking for a home. The VPA will have a key role, be it through our 100,000 lots program in the greenfield growth areas, or working with partners to provide innovative social housing solutions in the places where we work.

The VPA is a key implementation partner for Plan Melbourne 2017-2050 and we look forward to working with our partners to deliver:

·         clarity about where growth can occur in the suburbs

·         a greater focus on social infrastructure such as open space

Linked to Plan Melbourne 2017-2050, the Minister for Planning also announced changes to suburban residential zones, following a comprehensive review. The review found the zones had been implemented in an inconsistent manner across Melbourne. The changes are intended to protect suburban character, and keep more garden space in our suburbs.

These reforms will be positive for the VPA in pursuing greater housing diversity and better design in the precincts we work in.

The VPA is advertising for a number of vacancies, including four grade 2 planners and one grade 4 strategic planner. We will soon also advertise for a communications and engagement role, a policy officer and a transport planner, so if you know of anybody interested in roles of this nature please tell them to keep an eye on our website in coming weeks.

Please call our office or me if you have any questions or suggestions on these or any other items, or reply accordingly if you no longer wish to receive these emails.