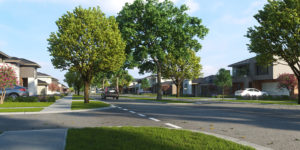 Our Minister, Richard Wynne, has approved a major residential precinct at Rockbank, in Melbourne’s booming west, bringing the total number of PSPs approved since the GAA began to 60.

The Rockbank Precinct Structure Plan (PSP) lays the groundwork for a new community that will eventually accommodate more than 22,000 residents and more than 8,000 dwellings.

What is really significant about this plan is that it is an example of good planning and infrastructure coordination in action. A new, modern suburb has been designed with great access to amenities and open space and is built around the existing Rockbank train station.

But the plan also contributes to new infrastructure – raising $220 million in development levies for infrastructure items, including a new six-lane arterial road connecting the Western Freeway and Greigs Road.

The new area will consist of 752 hectares of land, and is located approximately 30km west of Melbourne’s CBD. It will have a major town centre oriented around the existing train station. The town centre will include a public plaza with attractive landscaping.

Residents of this new area will therefore have easy access to key employment precincts, such as Caroline Springs, Sunshine and future jobs hubs in Toolern and Mt Atkinson.

Residents will also enjoy four new local sports reserves, all with pavilions, as well as a regional sports reserve to serve the wider growth corridor located on Greigs Road.

Neighbourhoods will be connected by an extensive network of waterways and wetlands, including a dedicated conservation area of lignum swamp along Paynes Road.

The new suburb will neighbour Woodlea Estate, the very popular new ‘smart community’ that is incorporating community facilities, such as educational services and a cafe, early on in the estate’s development.

Approvals like this keep the dream of a new home within the reach of many Victorian families. For further information click here.

The Minister for Planning, Richard Wynne, recently wrote to all councils about the VPA’s new $4.1 million Streamlining for Growth program that supports our work to

We have now updated our website with some more information and an online application form for interested councils.

So far we have received a number of inquiries from interested councils and eligible projects will begin work straight away.

To be eligible for assistance, Streamlining for Growth projects need to demonstrate the potential to deliver significant time and cost savings to the planning system. They should also be capable of delivery within the current financial year.

For further information about the program and project selection criteria, please contact the relevant VPA Director, or Robert Davies (Strategic Planning Manager) by telephoning 9651 9600 or by emailing robert.davies@vpa.vic.gov.au.

The VPA is pleased to report that Infrastructure Contributions Plans can now be employed by all growth area councils.

Infrastructure Contributions Plans are based on standard levies that are able to be applied to various development settings and land uses, creating certainty for councils and developers.

They will be quicker and more cost-effective to prepare in comparison to the former Development Contributions Plans.

The VPA will now be preparing Infrastructure Contributions Plans for PSPs currently being undertaken. For any queries about this, please contact the relevant PSP project manager.

Infrastructure Contributions Plans for regional areas and the established parts of Melbourne will be announced at a later date.  More information on the new ICP system can be found here.

Continuing our community engagement program around the Draft Arden Vision & Framework, the VPA hosted a forum for 15 young people at ‘The Huddle’ at North Melbourne Football Club.

The Huddle is a community hub that runs programs targeting young people from migrant and refugee backgrounds in inner Melbourne, and across the north and west of the city.

The event focused on public space in Arden, and invited the young people to consider what new features the space should incorporate.

Participants said it was important public space had adequate lighting for safety, plentiful walking tracks and amenities such as skate ramps and basketball courts.

Using 3D modelling software, the students were able to design a local park in the area and see their ideas come to life.

This feedback will be incorporated into an engagement report summarising community feedback, which will be used to inform the final Arden Vision & Framework.

Since launching on September 1, the Arden page on the VPA website has had more than 2000 site visits and more than 80 people have completed an online survey about the plan.

Participants were introduced to the history and background of greenfield master planning, policy context, principles, contents and variety of stakeholders and considerations involved with the process. They were then led through a design studio based on one of our live projects, followed with discussion on the implementation mechanisms and infrastructure planning through development contributions.

The participants were from a range of areas, including planning, development, local and state government, academia and engineering. Some were even from interstate, looking to learn from their Victorian counterparts. The course was well-received and is expected to run again next year, so watch this space.

Please call our office or me if you have any questions or suggestions on these or any other items, or reply accordingly if you no longer wish to receive these emails.